The constant and speedy progress made by humankind in the industrial revolution,
and more recently in the information technology era can be directly attributed to
sharing of knowledge between various disciplines, reuse of the knowledge as science
and technology advanced.

My intention is the presentation of the best Open Source Tools for Scientists and Engineers.

Qucs is an integrated circuit simulator which means you are able to setup a circuit with a graphical user interface (GUI) and simulate the large-signal, small-signal and noise behaviour of the circuit. After that simulation has finished you can view the simulation results on a presentation page or window

FreeCAD is a parametric 3D modeler. Parametric modeling allows you to easily modify your design by going back into your model history and changing its parameters. FreeCAD is open source (LGPL license) and completely modular, allowing for very advanced extension and customization.

GIMP is the GNU Image Manipulation Program. It is a freely distributed piece of software for such tasks as photo retouching, image composition and image authoring. It works on many operating systems, in many languages.

Is a free, open source CFD software package developed by OpenCFD Ltd at ESI Group and distributed by the OpenFOAM Foundation . It has a large user base across most areas of engineering and science, from both commercial and academic organisations. OpenFOAM has an extensive range of features to solve anything from complex fluid flows involving chemical reactions, turbulence and heat transfer, to solid dynamics and electromagnetics.

commonly referred to as GRASS (Geographic Resources Analysis Support System), is a free Geographic Information System (GIS) software used for geospatial data management and analysis, image processing, graphics/maps production, spatial modeling, and visualization. GRASS GIS is currently used in academic and commercial settings around the world, as well as by many governmental agencies and environmental consulting companies. GRASS GIS is an official project of the Open Source Geospatial Foundation(OSGeo).

The CAD System For Everyone

QCAD is an application for computer aided drafting in two dimensions (2d). With QCAD you can create technical drawings such as plans for buildings, interiors, mechanical parts or schematics and diagrams. QCAD works on Windows, Mac OS X and many Linux and Unix Systems. The source code of the QCAD Community Edition is released under the GPL (Open Source). 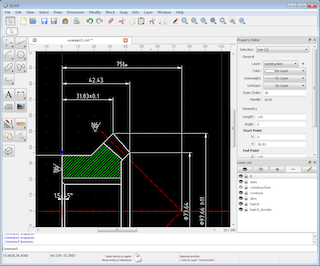 Blender is 3D creation for everyone, free to use for any purpose.

GNU Octave is a high-level interpreted language, primarily intended for numerical computations. It provides capabilities for the numerical solution of linear and nonlinear problems, and for performing other numerical experiments. It also provides extensive graphics capabilities for data visualization and manipulation. Octave is normally used through its interactive command line interface, but it can also be used to write non-interactive programs. The Octave language is quite similar to Matlab so that most programs are easily portable.

The Maxima source code can be compiled on many systems, including Windows, Linux, and MacOS X. The source code for all systems and precompiled binaries for Windows and Linux are available at the SourceForge file manager.

R is a free software environment for statistical computing and graphics. It compiles and runs on a wide variety of UNIX platforms, Windows and MacOS. To download R, please choose your preferred CRAN mirror.

PSPP is a program for statistical analysis of sampled data. It is a Free replacement for the proprietary program SPSS, and appears very similar to it with a few exceptions.

PSPP can perform descriptive statistics, T-tests, linear regression and non-parametric tests. Its backend is designed to perform its analyses as fast as possible, regardless of the size of the input data. You can use PSPP with its graphical interface or the more traditional syntax commands.

Sage is a free open-source mathematics software system licensed under the GPL. It combines the power of many existing open-source packages into a common Python-based interface.
Mission: Creating a viable free open source alternative to Magma, Maple, Mathematica and Matlab.

LibreOffice is a free and open source office suite, developed by The Document Foundation. It is descended fromOpenOffice.org, from which it was forked in 2010.